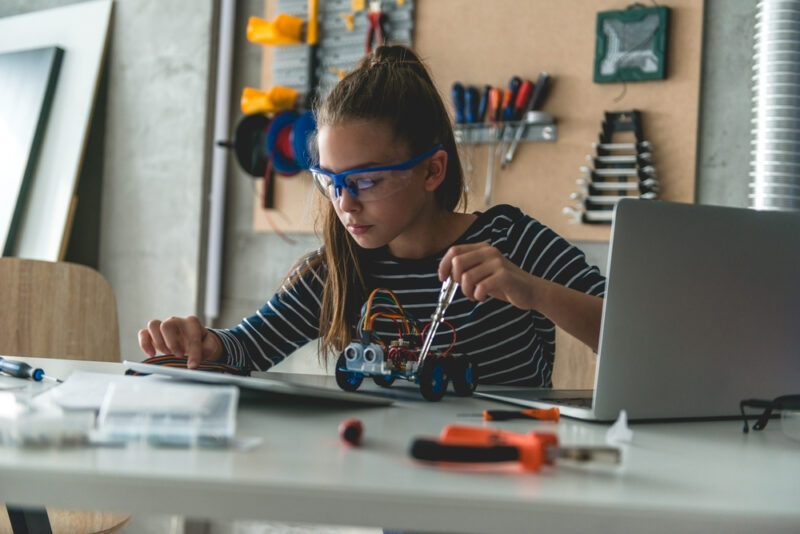 Females are leaving STEM fields at a faster rate than their male counterparts, and with a lack of female students studying to replace them, this trend is likely to continue. Currently, females make up only 28 percent of the workforce in science, technology, engineering, and math (STEM), with under-representation occurring in every region of the world.1 While females continue to become a larger part of the college-educated workforce around the globe, enrollment in certain STEM-related fields are particularly low, with females only comprising three percent of students in information and communication technology (ICT), five percent for mathematics and statistics, and eight percent for engineering, manufacturing and construction courses.2 As opportunities for females continue to improve in most fields, the lack of female-representation in STEM represents an issue not just for females, but for companies who are looking to build diverse and talented teams for the future. It is worth exploring not just why females are leaving the field, but also why they aren’t coming into the pipeline as well, and how we can solve this issue.

Biases Against Females Starts in Education

Bias against females in STEM fields occurs long before they enter the workplace, with some studies showing that it could begin as early as grade school. STEM fields are often stereotypically viewed as masculine by society. This has an exponential impact on education when, for example, administrators develop curriculums that favor males over their female counterparts. It also encourages educators and parents to, unconsciously, emulate that cultural bias. STEM-related studies also show that females traditionally begin to show math anxiety earlier than boys. This may also influence the perspectives and actions of educators and parents, leaving females disinterested in the idea of science and mathematics careers as early as the second grade.1 Further evidence of societal bias is prevalent in the media and entertainment industry. Only 12 percent of characters with identifiable STEM jobs onscreen are female.1

With all of these obstacles, it’s no wonder that female students are significantly underrepresented in STEM majors. Since the late 1990s, females have earned around 57 percent of all bachelor’s degrees, but only 21 percent of engineering majors, and just 19 percent of computer and information science majors.

Workplace Biases Against Females Start from Hiring and Continue Throughout Tenure

While biases in education affect the number of females who look to enter the STEM workforce, landing a job in a male-dominated field presents its own set of challenges. A recent, double-blind study at research-intensive universities, found that both male and female faculty members rated male applicants as significantly more competent and hirable than females with identical application materials. Furthermore, a similar study found that Hiring Managers were twice as likely to hire a man for a job requiring math.4

Studies continually show that work done by females in STEM-fields is typically highly scrutinized, and frequently taken less seriously, than their male counterparts. A recent study using the Hubble Space Telescope Time Allocation Committee showed that male scientists outperformed female scientists by five percent when proposals were submitted. When the proposals became autonomous results swung in favor of female scientists. Once the name was removed from the proposal, the deficit changed to only three percent. Finally, when the proposals were anonymized entirely, and all characteristics of the scientists were scrubbed, females outperformed males by one percent.6 Two-thirds of the females in STEM-fields reported feeling as if their successes were discounted and expertise questioned, while also feeling that they needed to continuously prove themselves more often than their male counterparts. Plus, while STEM-fields offer higher-paying opportunities for female professionals, females made $15,000 less (on average) than their male counterparts, while African American and Latina’s made $33,000 less.1

“Femininity” and Other Catalysts Driving Females out of STEM

Gender stereotypes are not an issue exclusive to STEM, but it has proven to be a catalyst for females leaving the field. Nearly a third of females in STEM have reported being treated as “less competent” as their male colleagues,3 and roughly the same number of scientists say they felt pressured to play into traditionally feminine roles. More than half (53%) have reported backlash for stepping out of stereotypical roles and showing behaviors like speaking their minds directly or being decisive.1 A lack of mentorship can also play a role, as 40 percent of female engineers and computing professional report a lack of role models and mentors in their field.1

Women working in STEM-industries also face a lack of resources like PTO and childcare when they decide to start a family. Studies have shown that up to 43 percent of females who became parents chose to leave full-time STEM careers, compared to just 23 percent of men. Erin Cech, a sociologist at the University of Michigan, states that STEM-fields tend to be “culturally less tolerant and supportive of caregiving responsibilities than other occupations,” leaving females feeling as if they need to choose between being a parent and continuing their career.

These issues have real-world consequences, not just for women who stay in their STEM careers, but also for industries looking for new ideas and companies who are looking to attract top talent. A lack of females in the pipeline means that it is more difficult to find the fresh, new thinkers companies need to stay relevant.  This affects not just the gender-balance of those looking to break into a field, but also those who are at the top of it. For example, while 80 percent of the health care workforce are female, only about 21 percent of health executive and board members are female.1

How Can Companies Do Better?

With female college graduates outnumbering men for the first time since the 1980’s7, the lack of  women perusing STEM careers, and the increase in women leaving it’s fields, has created an issue for companies looking to secure a well-educated, diverse workforce for the future. Some companies are beginning to take a more proactive role, such as Northrop Grumman who, in 2017, teamed up with the Society of Women Engineers to announce iReturn, a “returnship” program that helps people who have taken a career break prepare for a full-time job in a variety of STEM-fields. In the same vein, Johnson & Johnson and Cisco announced they were donating money, time, and volunteers to the program Million Women Mentors, which pairs women interested in STEM-careers with mentors in the engineering and science fields.8 Companies like WEX, and their female CEO Melissa Smith, are also investing in internal programs like their CodeX program which teaches children about coding and app creation.9

Companies are also looking at their own internal workings and focusing more attention on creating gender-balance in their workforce and management positions. Tech companies like Bumble, Genetech, and Etsy are good examples of companies that have elevated their gender-balance in their hiring practices,  with a 50 percent female workforce and 40 percent of their board and management identifying as female.10 There is also a renewed focus on investing in on-site child care, PTO for families, and other items that will help parents, especially females, balance their work with family.

There has also been more attention given to diversity programs focused on attracting more minority females into STEM. Currently, minority females only represent 12.6 percent of bachelor’s degrees and five percent of master’s degrees in science and engineering.1 Initiatives such as the AAAS S-STEM12 and grassroots groups such as Inspiring Diversity in STEM13 are actively working to bring more inclusion and diversity to both STEM education and the workplace.

The Future Can Be Bright

The decrease in females entering STEM-fields, along with an increase in those leaving, presents an issue for businesses looking to keep up with growing demand over the next decade. Companies who are able to attract and nurture female talent will have an advantage, and with STEM industries expected to grow by nearly nine million new employees in the next two years11, they will need to move quickly. Investments into creating a pipeline of female talent from as early as grade school will help make sure that the next generation of STEM-workers is gender-balanced as well.

The lack of females in STEM isn’t an employment issue alone, it’s also a case of gender discrimination STEM can no longer be viewed as a “masculine” field, but one that is open to everyone and everybody. This means creating better education opportunities for females in school and increasing representation both onscreen and in the board room. This is how we make sure that the future for females in STEM is a bright one.

This site uses Akismet to reduce spam. Learn how your comment data is processed.

CREATING POWERFUL CONNECTIONS! Connecting is for Everyone...
Virtual Connection Center Opens in a new tab
Back to
Login
×
Close Panel